Rice noodle salad, vegan & gluten-free – and what antibodies and food are all about 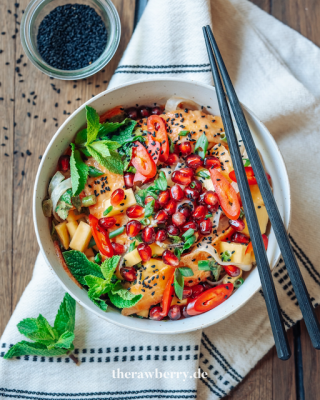 Today I have a very special recipe for you! It is incredibly easy to digest, vegan and gluten-free. A super light meal, perfect for the warm days. May I introduce: the ultimate rice noodle salad! With just a few ingredients and in 15 minutes, this is a real nutrient and taste explosion. But what is the story behind the dish?

5 years ago I was wondering what was behind all the vegan hype. What is it all about and wanted to do a self-experiment for 2 weeks. Two weeks vegan to understand what it was all about. It has to be said that before that I had eliminated industrial sugar and wheat from my diet as much as possible because I felt better without these foods. And what I didn’t know was that I was going to get an incredible surprise after the 2 weeks were up.

At first I didn’t think it was a bad thing not to eat meat or animal products anymore. I hadn’t eaten much meat before. The only thing I found incredibly difficult was the milk. Because I loved my latte macchiato in the morning more than anything. Without further ado, I just gave up coffee altogether until I could find an alternative.

And what happened in the next 2 weeks was gigantic:

I’ve never had any problems with digestion or sleeping. But suddenly I slept much better and my body functioned wonderfully and smoothly. It wasn’t until these two weeks that I noticed that I used to feel very limp and tired after eating. This fact is actually a contradiction. In addition, I lost 3 kg in two weeks without paying attention to it. I was speechless.

Since I really felt SO MUCH more energetic, I concluded that my body wasn’t tolerant of animal protein. I couldn’t explain it any other way. And so two weeks became 5 years and now even more.

What is food actually?

Food is really important for our body, even essential for LIFE. Otherwise they would not be called groceries. But what exactly are foods and why does our body sometimes develop an intolerance to them?

First of all: “Foods are substances that are consumed to nourish the human body. The term foodstuffs (formerly in southern German also: Viktualien) includes both drinking water and food (edibles) as a generic term.” – according to Wikipedia.

But when we look at foods related to intolerance, there are two big differences. A direct intolerance is when the body cannot cope with the contents of a food immediately after it has been eaten and this is evident through a reaction. As with me, with the slack and tiredness. It could also be a rash or something similar.

Now looking at antibodies, we have a very different matter. What are antibodies and what do they do? Antibodies are proteins that help the immune system fight pathogens or other unwanted substances in the body. But if we keep feeding our body the same food, for example wheat in the morning, at noon and in the evening, antibodies can also be produced against it.

This may not be immediately or directly apparent. However, if the antibodies are increased in relation to certain foods, this represents a clear stress factor for the body and costs energy. Energy that the body would need for other processes or to fight off viruses.

That’s why I took an antibody test to check, which foods my body has develop antibodies for.

Since all of my gluten-containing foods were in the red, I refrained from doing so for the time being. In the call with the nutritionist, she then made the next step clear to me: the relief phase. Here, all foods that are displayed in red are removed from the menu for the time being. Maybe just a brief shock. But if you think about it carefully, then this is about your own physical well-being. And no matter HOW good something tastes, it’s still more important to feel comfortable within your body – for the long term – and not to lose it for a brief moment of pleasure.

So for the time being I have avoided gluten, certain vegetables, ginger and garlic. And I had no idea what would happen here: my skin – especially on my face – has become much clearer. The blemishes around the period were also absent this time. In addition, a “calmer” body feeling has generally set in and my body actually seems to have inner, physical calm. I can currently understand quite well how the foods with a high level of antibodies caused a certain amount of stress. It’s a bit like a splinter that you’ve had for so many years that you don’t even notice it anymore. But once he’s gone – wow! You won’t miss him and you’re just happy about the detached feeling.

That’s why I have of course also adapted my diet and of course I don’t want to withhold a recipe from you. It’s an incredibly delicious and easy, vegan and gluten-free rice noodle salad with lots of mint and carrot. There is also a peanut butter dressing that provides additional proteins.

Print
Rice noodle salad, vegan & gluten-free – and what antibodies and food are all about
Cook Time
15 mins
Total Time
15 mins

Wishes, thoughts, feedback? Put them in the comments.

Thank you so much for stopping by and see you next time!

The Creamiest And Easiest Mushroom Risotto Ever – vegan & gluten-free

Leave me a note

Do you have ideas, questions, suggestions? Write them to me and I’ll get back to you as soon as possible ❤

I’m glad you want to work with me. Share your wishes with me here:
Newsletter

Be the first to hear about new recipes, blog posts and giveaways! Directly into your inbox!